Dear ones,
Isn't it strange? How the the terrain has changed.  We're relentlessly flabbergasted/numbed and blinded in one eye by the nation and its vexing problem-puzzles.
Certainly is a pleasure to have one's errand/chore interrupted in this way today:

so "relatable"  as they say

The Homeland Inspiration blog was started by (distracted) errands, mother's errands.
Just the practicality and inventiveness of the  a  inhabitant very likely made our day, so we're re-sharing it.  How it is not beautiful, but it is. We've taken to blogging as a way to gestate about art of the every day:
as you walk away.  Art being a frame of mind, a glimpse of something, art as a way of living in the world, was the only way we would get any art accomplished.  Art is labor, in myriad different ways: 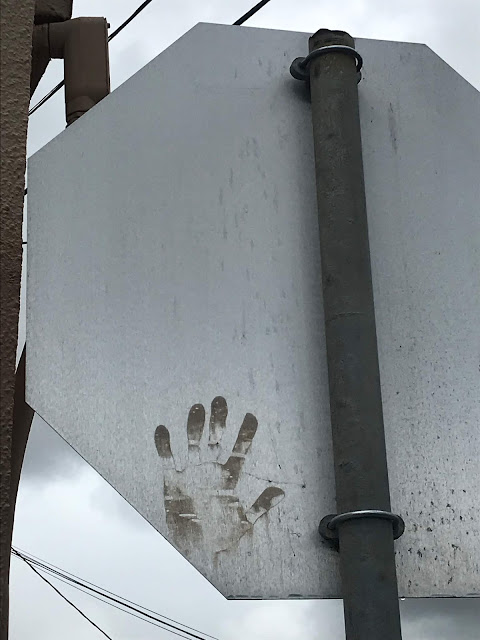 how planned was it? We're taken with this, and all manner of weathering its own wrinkles and dissolutions atop the(empty) back of rattling old officialdom.

Art Ranger, while watching out for art, has been tinkering: from the series REpurposed ARTworks 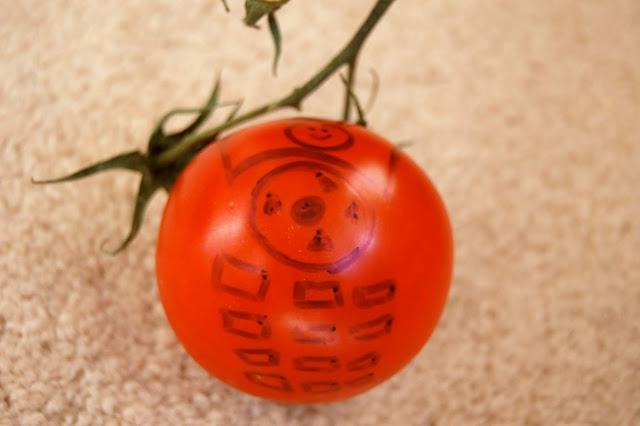 Do you ever long for an unsmart phone?

Did you know that we are tremendously interested in the visual epiphanies or sitings of others (such as yourself)?  please visit: homelandinspiration@gmail.com.  The Art Ranger has also been known to feature deliberate hand crafted art: shall you be next?

Posted by Artist At Large at 4:11 PM No comments:

Email ThisBlogThis!Share to TwitterShare to FacebookShare to Pinterest
Labels: intereactions

Dear ones,
Today's (Found Art) is merely a locavore recognition tour of the various poppy plants in the yard, requiring just a few steps out the door while holding a shiny rectangle that now thinks it thinks for us while we genuflect for colors, textures, refinements of light.

The sort of natural mess we relish
Last but not least, we just can't get enough of our California Poppies, that give and give and give.

And from the series, repurposed artworks
painful, watching it
try to rule the world
by its hair meds

Can you hear your own heart beat?  Please stay in touch by sharing your own version of Homeland Inspiration - to aspire and to breathe being word root companions: homelandinspiration@gmail.com

Posted by Artist At Large at 5:47 PM No comments:

Dear ones,
As we try to live with the intention of greening up this ransacked earth of ours, it takes a lot of adjusting the knobs: figuring out how to live upon the earth lightly is a life's work in which we can be blinded by our own habits. 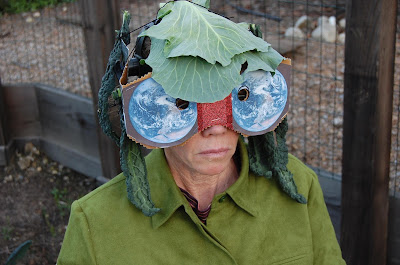 After an Earth Day presentation featuring Bea Johnson of the The Zero Waste home, we take a moment to admire this woman's project, persona, and following as a legit piece of performance art (social practice as they call it). Bea and her family of four have so chosen their living habits that this was their (non-recyclable) residue for 2018!
Not only is this a notable feat on this commercial bountiful edge of earth, but this woman was also hilarious and spoke with a lovely french accent which made the radical news about yourself go down easier.  She helped us understand that in our own kitchen we could not find our small whisk because we accidentally have three of them: 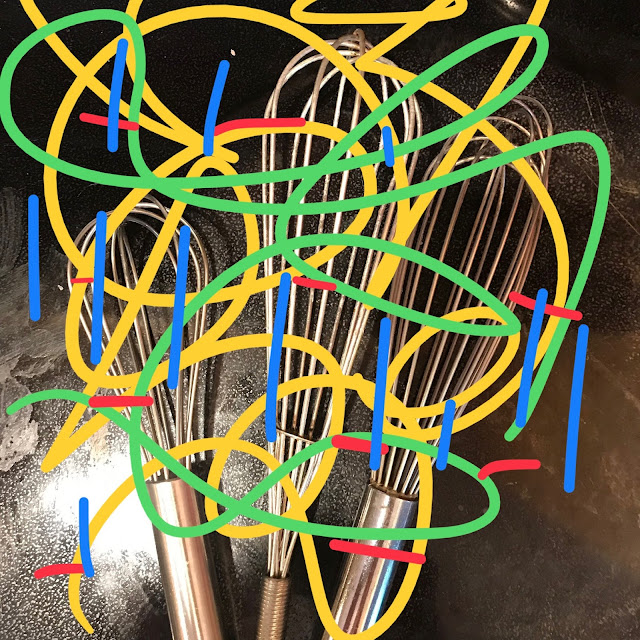 Seeing this Waste reduction guru of French provenance also made us re-kindle our affection for her countryman, artist Marcel Duchamp, who, in a different way - also performed some very environ/mentally friendly art.  For example, by ceasing to make objects during the last quarter of his life, only playing chess. Calling it "art", doing the thinking, that was where the effort was stored.

He also played with John Cage on some sort of sound collector chessboard, thereby moves making music.  Art that is a state of mind, "conceptual art" can then be packed up and played again. Unlike a large heavy haughty thing at the auction. 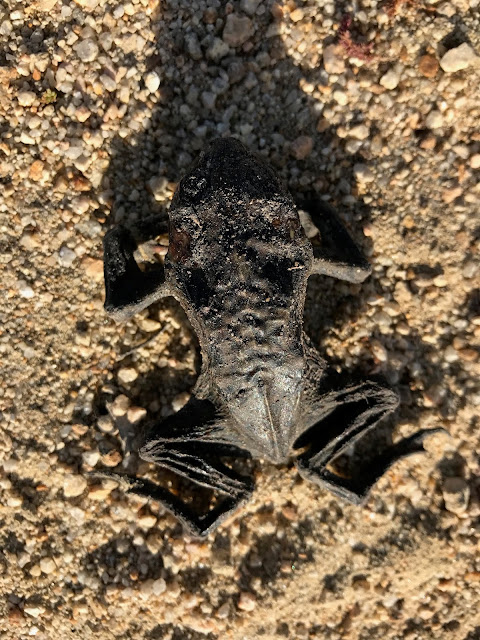 "Nature" is great at this: nothing will be wasted. Can't we humans act this way again? 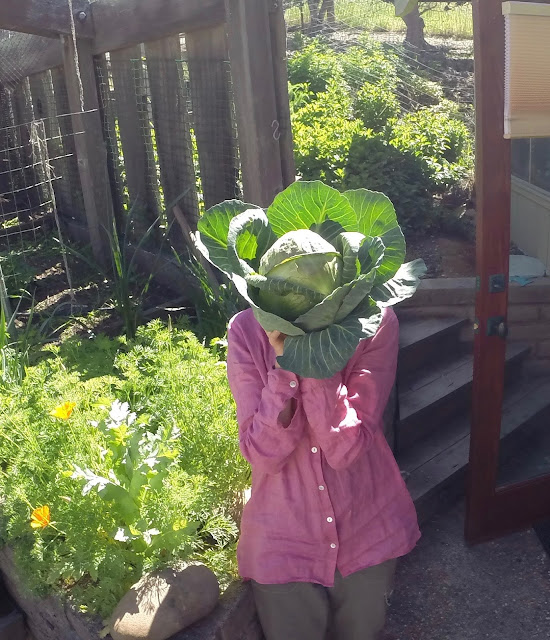 Well, it is daunting isn't it? to contemplate the surround while trying not to complicate it, to un trash earth with our actions and intentions.  Please unload your images into Art Ranger's inbox: homelandinspiration@gmail.com.


Posted by Artist At Large at 5:51 PM No comments:

Dear ones,
We are delighted to see that Art Ranger's inbox has assembled a range of offerings both of the natural environs and the artistic production sort:
While she weaves hairs of horses in a most persistent and ongoing fashion, reminding us here of so many different nodes and nodules, loosely toying with gravity, subtle where it bends.
Also this week (Best Friend a person could have) is at  a new establishment called "The Filling Station" in Bellingham, Washington (we're already a fan).  Here, she witnessed an uplifting artistic intervention:

Today we enjoy our backyard webs even more after hearing from Amanda, our weaver.
We'll call it scintillating, a word that can now be put to rest.  What has amazed your senses, or smiled your while?   Send to:  homelandinspiration@gmail.com.

Posted by Artist At Large at 8:20 AM No comments:

Email ThisBlogThis!Share to TwitterShare to FacebookShare to Pinterest
Labels: mentors in nature

Dear ones,
What has stubbed your toe lately?  As usual, non human animals just know things that we don't.  Every special teacher we have ever had throughout these life chapters says something about one's heart.  "Listen to your own heartbeat, can you?" says Tai Chi Instructor Leonard Han.  This week, Art Ranger had the pleasure of seeing this man's art studio.  As our practice is to treasure art of the moment, we also get to witness a visitor and its iridescent neck seeming so at home with this art ledge found on Cannery Row.  Lovely siting for a work in process that is already about process: 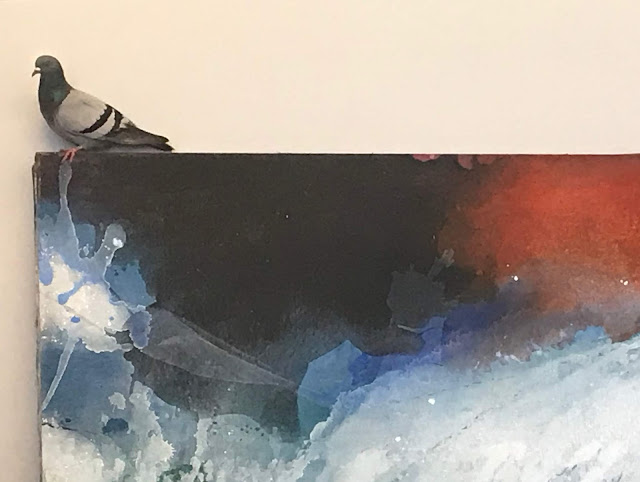 This viewer had the doors blown off her eyelids regarding the paintings; not just the craft, but its narrative potential, in careful, mysterious, figurative configurations. Yes, go figure!  We're still trying to get the hang of yin and yang! Along the way, this man was, is,  and will be painting, though all we really knew about was the breathing (yes those "breathing lessons" we love to re-shape and share and shift). Or, try the horse pose while holding one's arms as though there are pigeon eggs in pits thereby increasing circulation - isn't that what all the world needs to know about itself?

Local showing of this work in July!

In contrast, a week ago we attended an Art Fair in San Francisco featuring 92 galleries.  This somehow is Art Ranger's favorite copyright protected picture from the day.
Please tune in by sending us images.  So very refreshing would it be!  Otherwise, we make it all up:  homelandinspiration@gmail.com

Posted by Artist At Large at 12:45 PM No comments: