It happens sometimes, Art Ranger lets herself get carried away (obsessed) by the darndest thing, which in this case was Lady Gaga singing last Sunday at the Oscars a medley from the Sound of Music.  First of all, there was the surreal juxtaposition of a tatted up Lady G lilting the songs of our most wholesome of non nuns, Maria  " The hills are alive ......  la la la.... ........ Edelweiss ... Edelweiss  .... small and white  ......  clean and bright   ...   ..."  It was none of that and yet she pulled it off. 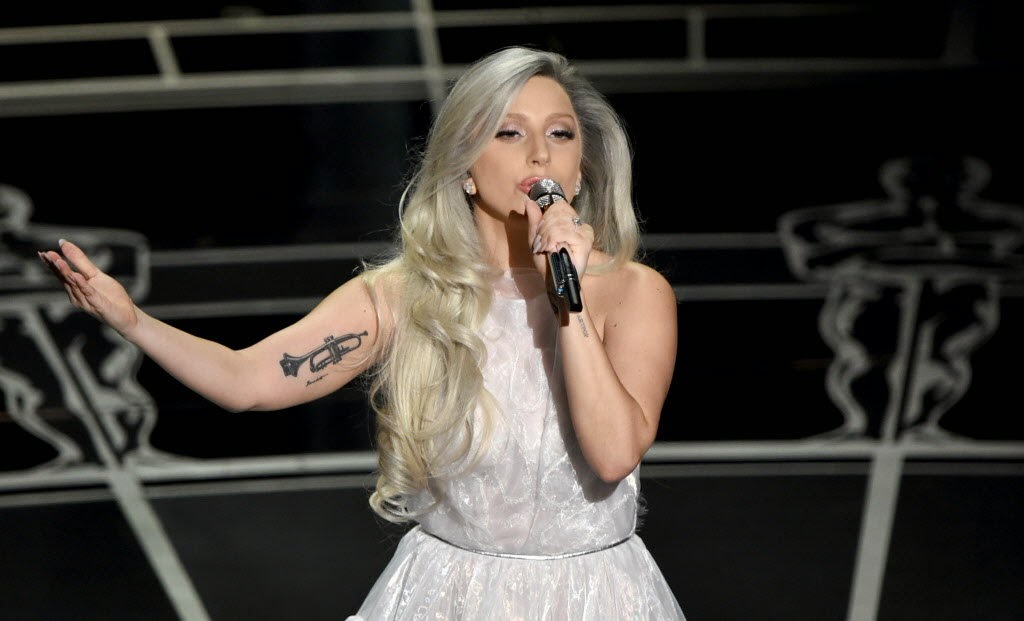 Then there was the prominent trumpet on arm thing that we couldn't stop looking at - why that there?  Why has Gaga armed herself with a muted trumpet?  Well, we find out that she needed to have Tony Bennett's drawing of Miles Davis' trumpet etched permanently on her armature as part of her "Cheek to Cheek" experience.

That is so meta, so loopy .....  just a more graphic than usual example of artists feeding off of one another for inspiration. 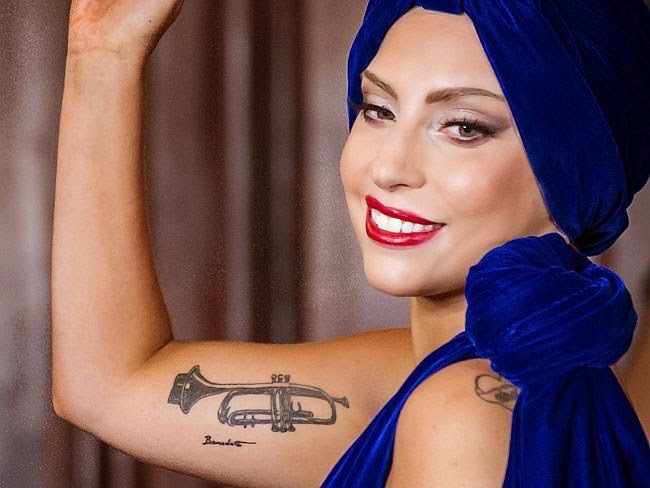 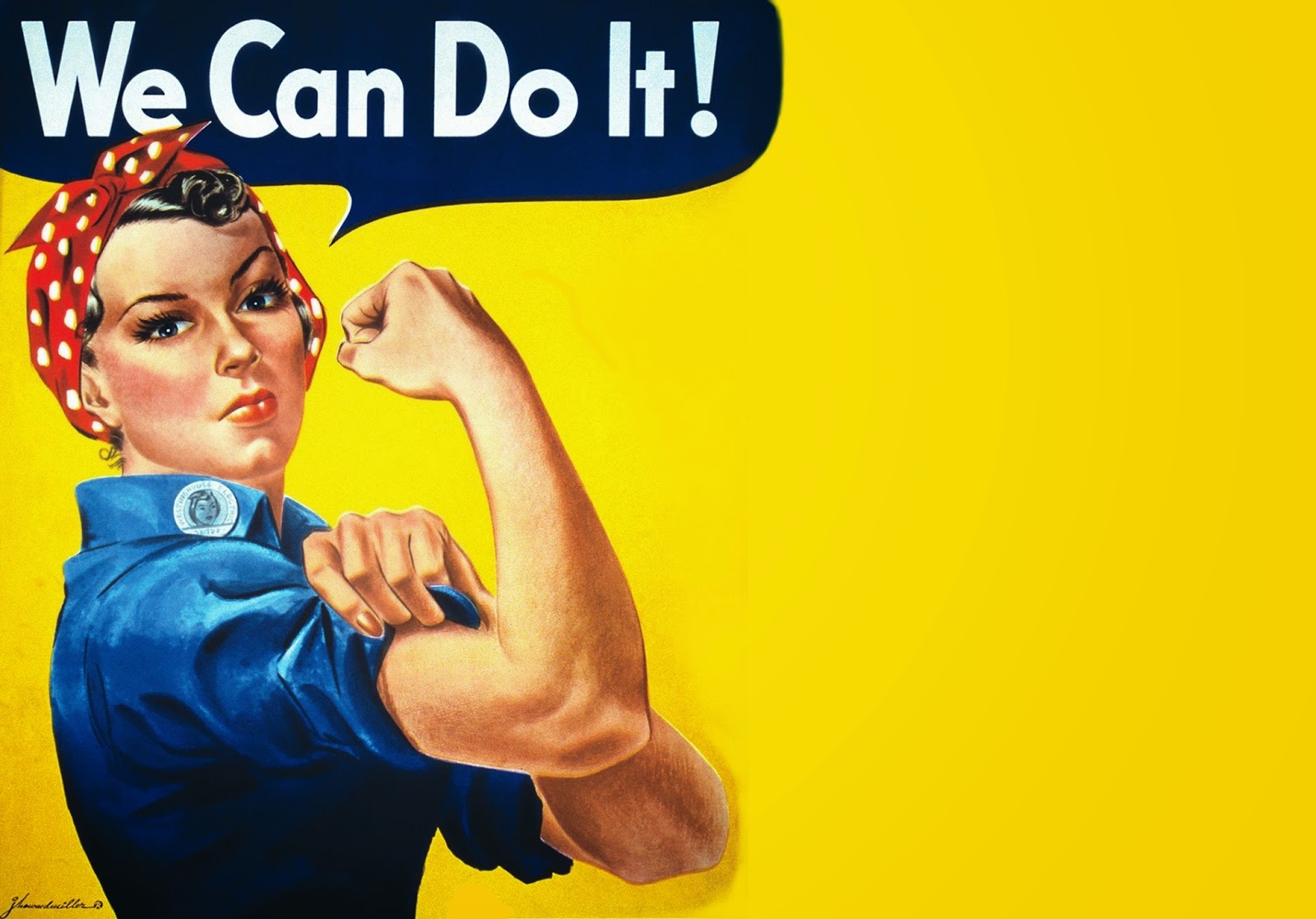 Or is it a nod to this?
Though here at The Department of Homeland Inspiration we have never sought out Gaga's music, we do enjoy taking note of the highly calculated visuals of this artist's artistic personae and wonder what mashup of past present and future she will bring forth next.

Please send us random finds from your world (so we will not go Gaga) to: FAF@homelandinspiration.org

Posted by Artist At Large at 10:31 PM No comments:

Email ThisBlogThis!Share to TwitterShare to FacebookShare to Pinterest
Labels: trumpets in odd places

Dear Ones,
Behold - this is the art for today:
Happily, our research correspondent in the Bay Area has informed us that this man was John McLaren, who was Superintendent of the park for more than 50 years and didn't like "stookies" (statues)!  Oddly, now his stance, and rapport with object in hand, have whole other connotations.


Since we are obsessed with wonderment about humans and their tools, we are today sharing some art adventures from years gone by that very few people ever have seen.  This required some sifting through the internetia of of our own miniature historia:

Posted by Artist At Large at 11:14 PM No comments:

Dear Ones,
Have you ever found yourself feeling sorry for a fire hydrant?


Here you want to breathe and drain the wound.  To allow this ultimate plumbing fixture to be able to be stately again.  Admiring of foundry work, hydrants have always seemed to us such worthy sculptures.   Colorful sturdy reminders of a caring civic infrastructure.  Those things you want to trust about us. 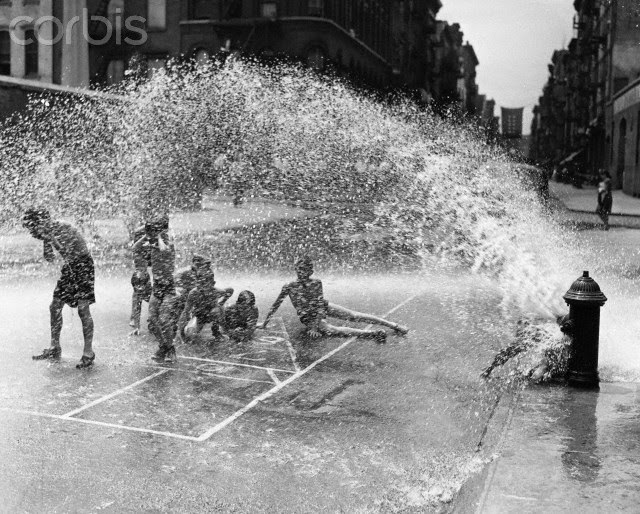 Memory FLASH from bicycle ride across the united states of america in 1984 - we saw glorious fun like this and now, decades later, understand the flip side.

And you? Please send selected moments to FAF@homelandinspiration.org
Posted by Artist At Large at 5:00 PM 2 comments:

Email ThisBlogThis!Share to TwitterShare to FacebookShare to Pinterest
Labels: our favorite color is red

Dear intrepid ones,
Today's Found Art Friday revisits a book called "Ways of Seeing" (circa 1972) by John Berger that made a loud squeaking noise on the Art Ranger's bookshelf until it was pulled out and cracked open:
(Berger in bold)
It is seeing which establishes our place in the surrounding world: we explain that world with words, but words can never undo the fact that we are surrounded by it.  The relation of what we see and what we know is never settled.


"that we are surrounded by it " has taken on new meaning since 1972.  "It" is a vastly different place of (in part) self-made-selfness traced through images-therefore-i-am residue that circulates in a riotously abundant manner ..... instant grams, snaps of chats, posts, loops, memes, #s, and obsessive self-noticings of myriad mobile, satellite and cloud-assisted never-before-possible forms.

Even still, with all our overabundance, so very many moments we perceive,  just do not translate into photographs, yet, we continue to strive to capture more, more, more, as a kind of salve to the living breathing surprise-loving brain. Yet, a great many other image-moments are only noticeable or memorable due to their unpremeditated, out-of-pocket instant inspirational stoppages in time:
Images were first made to conjure up the appearances of something that was absent.  says Berger. Gradually it became evident that an image could outlast what it represented;... 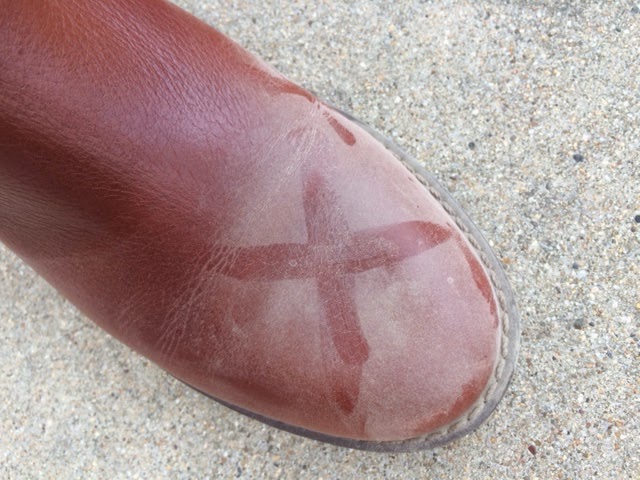 An image became a record of how X had seen Y.   He goes on to say:  This was the result of an increasing consciousness of individuality, accompanying that an increasing awareness of history ...   Hmmm. ..... so now Art Ranger wonders about our current "consciousness of individuality" versus increasing? awareness of history.  Uh ....  don't think so ..... more likely to just take things out of context:

What have you loved to see this week?  Send suggestions to our inbox here: FAF@Homelandinspiration.org
Posted by Artist At Large at 10:49 PM No comments: