Dear Peoples of the blog,
Just when we thought the Squashed Abandonned Glove series had dried up, it came upon us on a walk one day, the neighbor's car, a 72ish Mercedes deisel blue-gone-to-grey parked askew on the bank.  Mind you this neighbor, by now shaped like a fish hook, it was already outlandish to even see this man outside without his slippers.  All neighborly she asks, "is everything all right?".
Turns out that the man was looking for a glove.  A blue glove. "I'll keep an eye out for it" says she ......  Little did he know how prone to finding one of things we were. 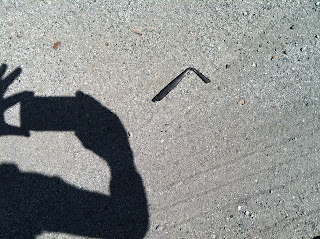 What has evolved instead from this series is a general squashed abandonned phenomena.  The collage of the collision of pavement or groundscape with humans.  And how it really surpasses litter, becoming part of something else: 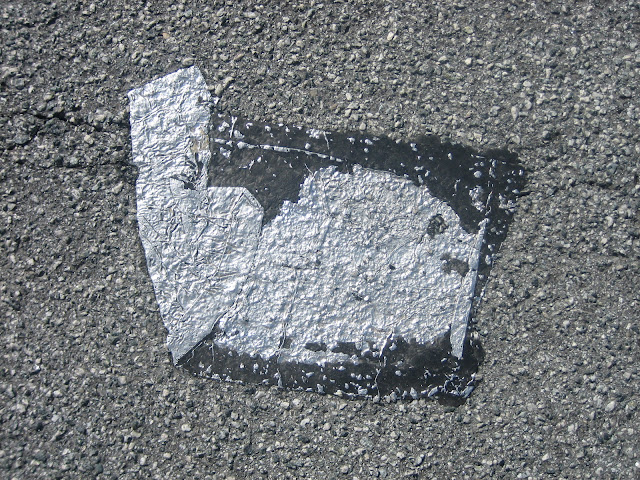 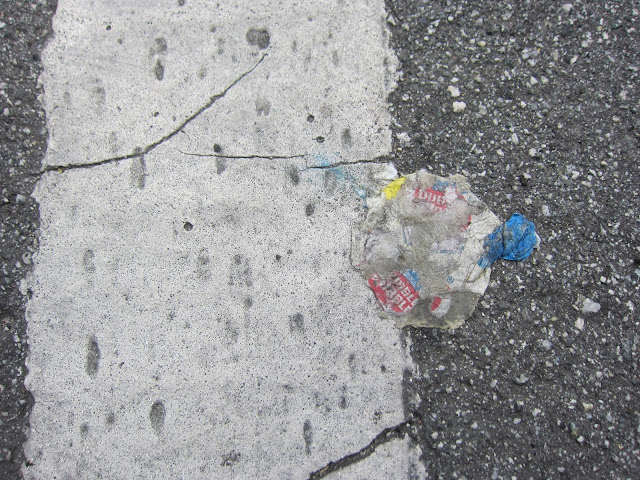 Amazingly the Squashed Abandonned series now intersects with the Patina Series as these aged organics manage to dazzle like fashion models. 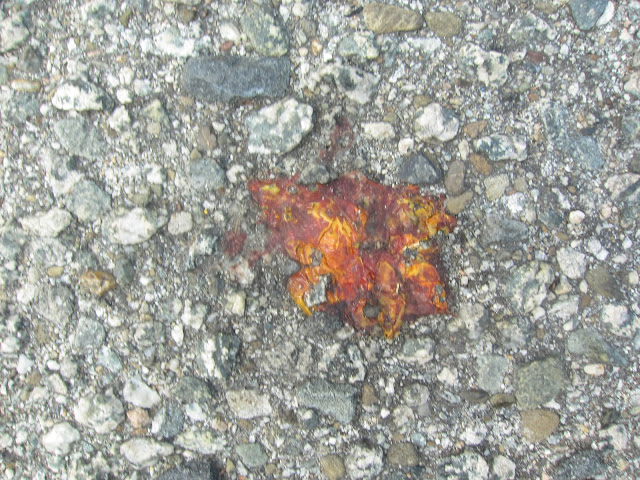 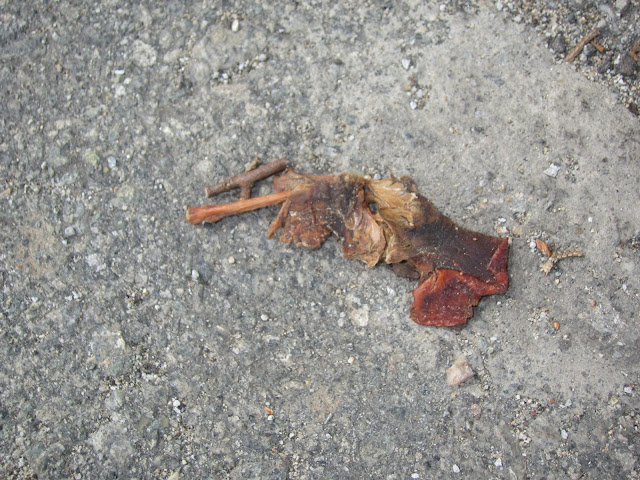 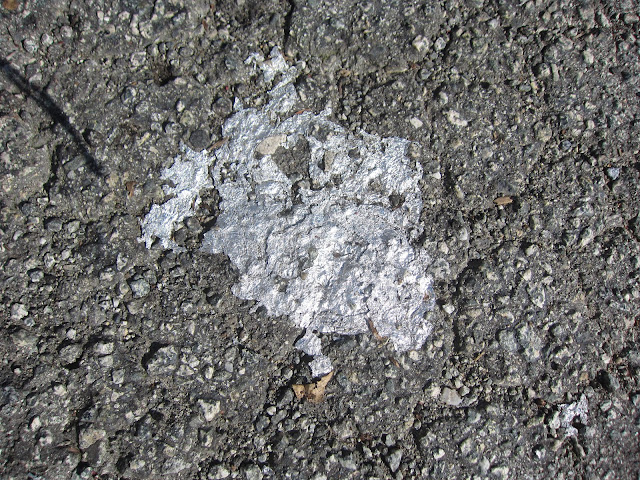 There must be a spirit animal there somewhere.

Next week's Found Art Friday will be dedicated to:  Flying Saucers.  Or whatever you find interesting.  Please send to FAF@homelandinspiration.org
Posted by Artist At Large at 12:30 PM No comments: 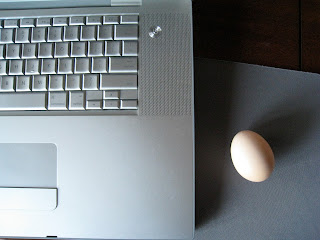 How did we get here? And why? the hundredth dang time of collecting uploading and saying something about a few images? Why, because The Art Ranger is still in fact "at large" and on the lookout for art, she's not at her desk (except she is). The Department of Homeland Inspiration has become a service job regular as toast on the one hand, yet still motivating, a form of orange alert regarding the infinite supply of potential images in the world, and a simple practice of sorting, of sometimes seeking meaning or aliveness in the mundane. Especially, the surprises from you and her own back yard.  To commemorate the strange and accidental fact we've reached Found Art Friday 100 times, we wonder if hadn't randomly begun to number the posts, would we still be carrying out this business?  Did you egg her on?  Today we feature some FAF classics from posts past: 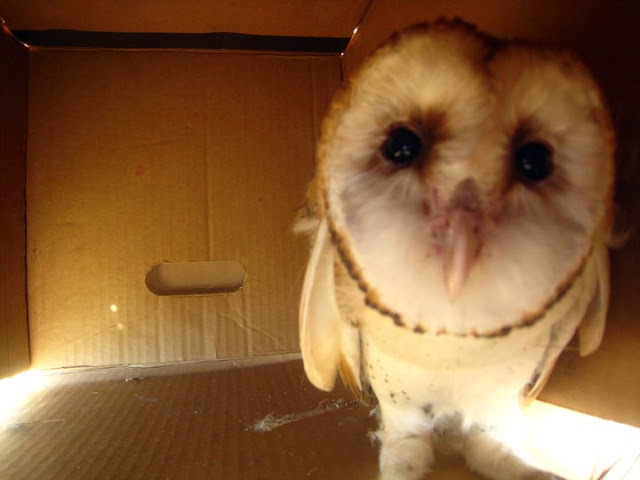 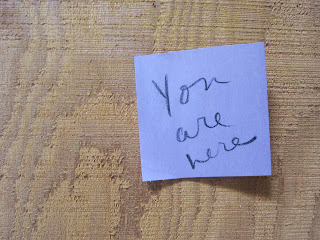 Well, we might as well keep it going now.  Please look both ways plus up and all around.  We hope to engage your sent found moments here: FAF@homelandinspiration.net
Posted by Artist At Large at 12:02 PM 2 comments:

Dear Blogospots,
Today's Found Art Friday has the added spice of being witnessed on this actual Friday.  It took the form of radio instants isolated while driving; we heard about a concept called "frame dragging".  Doesn't that sound captivating?  It's some Einsteinian wobble affect of mass thing. The sound of it, the image, calls to mind our current cultural condition, our documentation of everything in between now and then, plus the new now made up of an explosion of our devices.  And yet, we still must care how we frame things.  This radio Frame dragging went along with a discussion of black holes and how they were messy eaters. There was also talk of a "pancake of inwardly spinning matter".  Just as The Art Ranger was relishing the jargon on her car ride (in windowframes are moving farm fields) ..... Suddenly, a large segment of cardboard spirals messily toward her car and gets swiftly sucked under and stuck to the bottom of her chassy, making a somewhat strange high hummmmm. When we stopped, the cardboard flap released itself from her mufflered stomach.  Literally, we were "frame dragging". 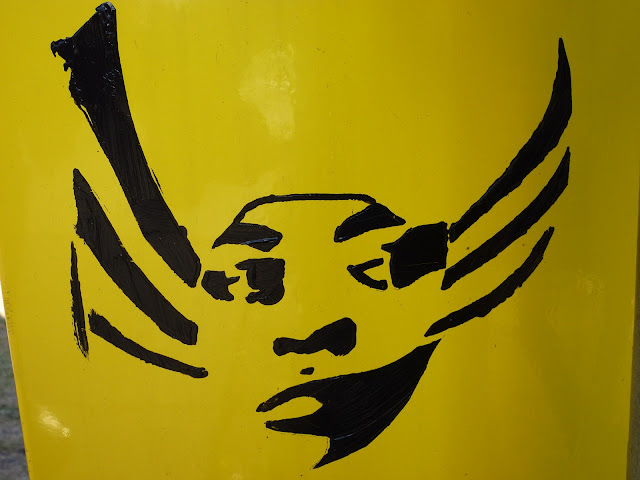 "Angela Davis with wings": more grafitini from our friend in the Bay Area.
All those different ages of leaf simultaneously present, working toward decay.
When lens and timing come together, this most impossible thing to photograph is within grasp.

And lichens must be the go-between between light, air and metal.


Have a great week while deciding just what to focus on.  Please sEEnd some to FAF@homelandinspiration.org.
Posted by Artist At Large at 4:34 PM 1 comment: