Here at The Department of Homeland Inspiration - we're lucky to have a dog we must walk. In so doing, the same path is never the same:

We try not to let it get to us.  But it does, because we're all about percolation, digestion, reflection ....


Since it is Harvest Festival season, we are are going to celebrate the large category of vegetable named squash and the exuberant way that it grows and plans how to support items that may weigh more than a baby and feed an imaginarty (yes a typo) village. 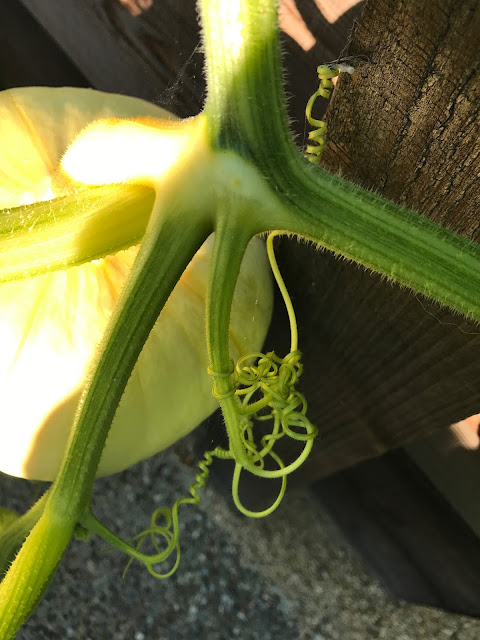 Do you have pleats or darts or warts?  Please share at FAF@homelandinspiration.org

Posted by Artist At Large at 9:08 AM No comments:

Dear Ones,
Despite finding ourselves placed on a precipice
erected by two bufffoons
that are way too into their hair
running hot, wagging tongues waging
swaggering wars whilst investigation warms to cut close
around his sick heartlessness while we gawk with jaw agape
at nature's power to completely dismantle human efforts
while tweeting at-risk-for-stupidity senators regarding healthcare debacle
We would like to see (or make) a sine wave frequency of our global anxiety level
now
versus
then
Oh yes - here at The Department of Homeland Inspiration, where every day is full of work and play (if we are just able to notice and to breathe .....); the following lovelies and oddities have entered our community inbox:

Now here are a few more captures from Art Ranger out on the range.  These emphasizing the entrails of civilization:

Speaking of which, we found this page amongst the 48 years of flotsam and jetsam in the childhood bedroom.  Let's call it Story in a Jar:
Have you changed much?  Please tell us through images or stories or squashed findings ... .......
send to FAF@homelandinspration.org and we will certainly try to weave it in.
Posted by Artist At Large at 6:46 PM 1 comment:

Email ThisBlogThis!Share to TwitterShare to FacebookShare to Pinterest
Labels: we like prime numbers more than prime rib

Dear ones,
While we were "at large" over the summer, a number of images crossed our path and here are some of them:

It's kind of bipolar for the turtles, which makes perfect sense. Artarama is where mama want to be!

Many of you have experienced the environmentally friendly digital grafitti left by The Art Ranger
on Facebook ((oh geez now what've they done?)). When we notice friends images from a "found art" angle, we often comment "Art Ranger was here!".  Two from a high school classmate whom we haven't laid eyes on in person, for perhaps 38 years: Katie Sweeney Kikawa in Seattle area.
Our menopausal teenage brain tries to remember her school girl essence and wonder about this person now, deduced from a few photographs, old and new.


Art Ranger found this edible mitt to be quite endearing.

Now a few more gleanings from the Colorado Motherlode (Home on the Range) area:
It does make a difference how and when and where a thing was made!

We are in dire need of such at this moment! There is not quite enough humor to butter over the toast of our nation as it continues the excruciating "reveal".  Resist and persist we must, nevertheless!

Until we meet again: and we certainly hope that it could be through you sending an image of your own notion of "Found Art" To:  FAF@homeland inspiration.org.

Email ThisBlogThis!Share to TwitterShare to FacebookShare to Pinterest
Labels: What we think we might be talking about

Dear ones,
You go away for three weeks and the birds now sing a different song.  Before we get to the scraplings of a visual travelogue from Art Ranger's time out on "the range",  there was this:
Which made an all out visceral emergency of the mundane errand, especially should you absent mindedly check the news.  But it sure fit as a backdrop of NOW.  Given the hurricanesque torque of incompetence as it re-smacks us in the face daily alongside the grueling groans of Nature: she is fed up and disgusted, having a sheer blow-out.  While the Tweet equivalent of a toxic vomiting disorder continues, each new news breaking and breaking at break neck speed, like there's no tomorrow.  Sure - we have a tiny rain boot and a firepants leg and big Assload of arms. We have cartoons running us over and grabbling our country's assets, bagging it up for themsleves and wearing your sweat equity like diapers under their hairdo, funneled down their slick-haired golden inflated toilet sponge.
We keep hearing that we are in "uncharted territory" again and again and again.  Now there's also a "cone of uncertainty", which certainly mirrors what the DACA recipients will now have to wear on their heads every day;  so often the most inspiring and aspiring students. Ones who made you love your low wage job any way any how.

As mentioned, we were tasked with the gigantic debris storm of sorting through 48 years of the motherlode of our mother's belongings and entire life.  We now contrast that with weary souls in the current "cone of uncertainty" where nature's force may dismantle object-accumulation in one fell swoop of "eyewall replacement cycles".
............ Breathe .......... 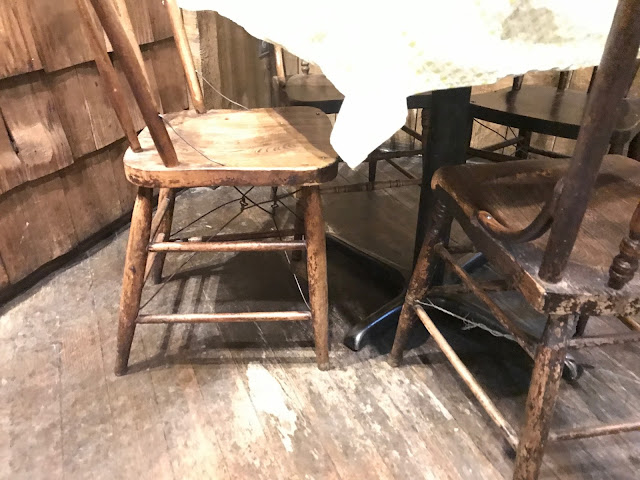 Despite unsuccessful photographs, each chair was fitted with a private wire sculpture underneath the seat to help shore up and flex with the loosened legs.  Art Ranger thrives on tiny moments such as these.

Vignette from Minturn, Colorado
You just keep going regardless - into a new time zone, a new century,a new technology.

Our inbox is gladdened by accumulating a few of your images - hello people out there!:  FAF@homelandinspiration.org.
Posted by Artist At Large at 9:36 PM No comments: