The Art Ranger was again At Large, and shall attempt to report her findings:
Ladies and Gentlemen, it has been 29 years since her last visit to Reno, Nevada.  And behold, she is still with the same great guy she met the summer of 1984, with whom she bicycled over Donner pass, had a beer (or few) at the Three Legged Dog Saloon, cried tears of foggy joy crossing the Golden Gate bridge (and much much more) as part of a two-wheeled oddessey from Boston to Los Angeles raising funds for Oxfam America.  Nearly three decades later, we are in charge of two teenagers, a house on a lot, a dog, and six chickens that she often feeds while wearing her bathrobe.

Clear as day, fragments of a 1980's Tom Waits song comes back to visit her mind:  "Drove all the way to Reno on the wrong side of the road".

The occasion for our visit this time was "The Largest Basketball Tournament on the Planet". With two boys in a whirl of headphones, conversation and ruckus in back seat, for five or six hours she followed the dotted lines and numbered instructions, looping on and off the highway in search of nearly inedible food. Trying to be a grownup now, she drove all the way to Reno on the right side of the road. 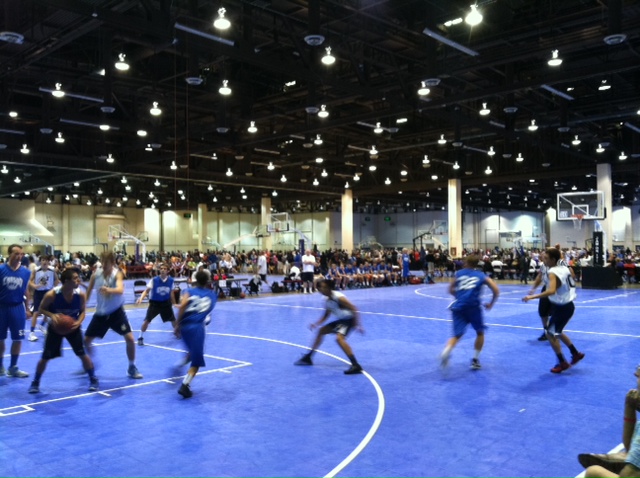 Thousands of kids of all ages and sizes and colors bounced an orange ball and threw it up in the air or across and under space in pursuit of getting it through an orange hoop in the air.  Shoes squeaked and whistles whistled; the elusive twin forces of hitting or missing the hoop played themselves out and in. Rims robbed some and gave some. Pump fakes.  And ones.  Flagrant fouls.  Nets absorbed and deflected the ball.  Shoulders bumped in zigzag fashion.  All to shoot hoops. 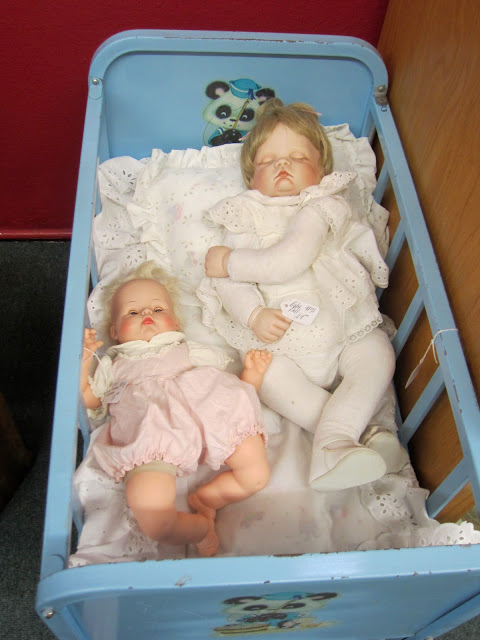 For a short while, The Art Ranger committed the radical act of browsing.  A most indulgent and rarely experienced pass time that can occur when one is far away from the kitchen sink. There were used cowboy boots and hats from the 1950's.  Boxes of vinyl records with The Eagles right next to Harry Bellafonte, then Dolly Parton before breast implants were invented. There were kitchen tools with hand written tags. Plain sheet metal bent and cut toward function, probably made in America and the handles always had to be red.
Now Reno, vast square miles of pavement with tall outcroppings of casino with a lovely mountainous backdrop.  Nuggets of gold hidden somewhere where you can blink and it's gone.  Even the pharmacy and the grocery store had slots with one or two permanent people camped in them. Pleasantness and plain ness, poorness and grand ness right next to eachother over and over again.

We ate fried chicken near some friendly folks with matted hair and missing teeth who burped out loud and adored their baby.  Okay, there were lots of regular people too.

After an hour of google map mishap, we find a grand Brand New Mall which turns out to be (a former Super Fund site) with the greatest biggest (boys think most funnest) sports store in the world in it.  A stocked fishtank with fish the size of arms and legs, an antelope diorama, a talking Abraham Lincoln manequin with a bad hair day upstairs, and in the center of the store, a Ferris wheel full of only giggling girls.  While shopping for flipflops or fishing waders, people carried around chihuahuas in their campground arms in this confluence of entertainment, gambling and shopping where there is no time of day.
Meanwhile, at the Largest Basketball Tournament on the Planet they bounced and bounced the balls and thew them up in the air while shoes squeaked some more and sweat dripped on 44 courts across square footage adding up to miles.  Nearly every third kid on every court had some sort of ankle hugger knee brace, elbow warmer, compression sleeve, shooting sleeve, knee warmer or other dashing fashion reminder of the wear and tear of sports development on young bodies hung on threads of hope and hard work. The trophy room was stocked with tall gewgaws for the champions and guarded with patriotic colors.  The water cost $3.00 and the machine was all out.

Oh and another Tom Waits song fragment for the way home (thank heavens for home):

Email ThisBlogThis!Share to TwitterShare to FacebookShare to Pinterest
Labels: all the way to Reno

Dear Ones,
For months of teaching, The Art Ranger asked students to do more, please do more, go farther, deeper, wider.  Try it.  jump over a hurdle even and hit it with your leg. This is an ART project afterall.  But this week, the news is flooded with a different More as in (Moore), OK.
Since we are in the image and thinking business, we're drawn to the eyewitness reminders of humans not even as important as ants.  Our teensy weensy itsy bitsy ness. 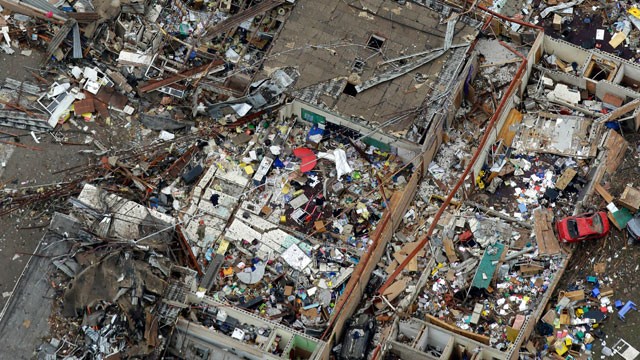 Of patterns in universe versus us and all our big tiny human container feelings.
We are also in the business of juxtaposition:
Somehow those heart wringing images also go so well with this above gem sent in last Friday from our friend, art for life brother. And thinking of those lost angels, too soon swept.


What ends up where just amazes us.
Well, have a week of memorializing and such, see wonders, do wonders?  Let us know at FAF@homelandinspiration.org.

Posted by Artist At Large at 2:00 PM No comments:

Dear blogos,
Well yesterday was Monday, but somehow it is already Friday.  Recently, we received this image in our community mailbox from "Uncle Dave".
It must be good to be in touch with your animal spirit and pray to the wishing well in preparation for any airport experiences.

Fact is, this brotherman Dave is the animal whisperer of the family.  In his presence, birds in captivity will hatch things. Turtles stick their necks out.  Dogs listen and bow to play.  Cats stop what they are doing.

Since 2010, Dave and his son have been learning the art of falconry, first as apprentices then receiving their general license in 2012.  One day early in the process, the Art Ranger attempted to document this human bird rapport and here is a glimpse:
Bird on a Stick
If we ever add a soundtrack and take out the wind noise, it would include bits of flamenco music.

Now Switcheroo
Posted by Artist At Large at 5:33 PM No comments:

Dear ones,
Last week, the Art Ranger missed her assignment as she was truly "at large".  She's tried to prepare those freeze dried blogs that post themselves while you are a way, or she even thought she might be hip enough to document the amazing adventure with her phone and post the findings from her hotel room. But the fact is, what we experienced was unphotographable. Lenses and apparatuses just couldn't have captured what we saw, so instead we will endeavor to share a color memory chart.

We got to ride our bicycles along the Big Sur coast, a narrow Hwy 1 mostly along the edge of a cliff for 96 miles (that is under construction due to rock slides every day of its life).  Nearly every glimpse and moving frame of the pedaling grinding churning day was jammed with various kinds of beauty and wonder.  From lavish bunches of poppies of varying yellow-oranges glinting in the breeze, to groves so vertical of Redwood gravitas with air sharing pockets of 500 year old oxygen.

From a bicycle, you could gaze just below the guard rail where cliffs with flowers jutting out of them them and patches of white beach with tourmaline waters sparkled far  far below.  Frothy turquoise, deep bluegreen or greenblue. Taking breath and breathtaking.  Rocky ocean painting and repainting itself in a constant edgey swirl.

At times, you were relishing gravity and sticking your knee out like a motorcycle racer flinging down hills faster than cars. Your hubs sang with joy.  You smiled like dogs out car windows.  We thought of our dad, Bob, who would have been there with us, except stopping to do a couple watercolor sketches, and taking his sweet old time.

Meanwhile, her hind end was getting to have a sitting-on-nails feeling. She moved on to add inner leg aching to outer leg aching to knees hurting to hanging on for dear life with salty neck and salty face.  But there were awesome sparks of more than blue sky and we decided that our journey was epic and  therefore it was endurable.  And thanks to some air fluidity physics, friends in front of her were able to clear away friction causing molecules and help her unprepared body to finish the job.

Oh, and here was the color of the patch of grass that she lay upon (and could not get up off of) after the whole fabulous ordeal was over.

Please help us grow a story and send it here:  FAF@homelandinspiration.org
Posted by Artist At Large at 8:33 PM 1 comment: