Dear ones,
This week's Found Art Friday is a collection by our family clan member Uncle Dave, bird whisperer and professional Falconer, working in Fort Ord.  Man and birds in communion have provided the service of preventing Swallows from nesting in the "blighted buildings" during demolition.  Would you have thunk it?

Art Ranger and her DIY tribe, we love to make things.  However, always looming on the horizon are destruction and impermanence; and how beautiful that can be once we let go of the pieces. And let the pieces go. 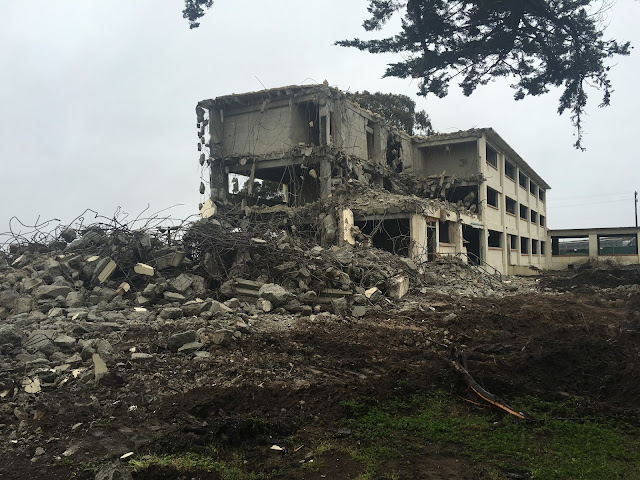 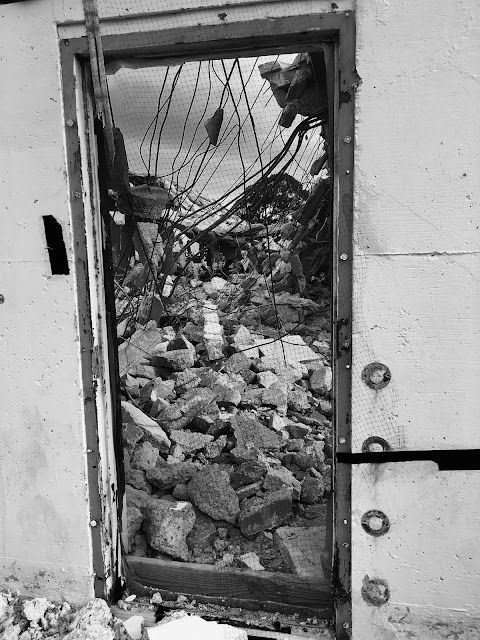 Watch Mora the Aplomado Falcon do her work of discouraging Cliff Swallows: 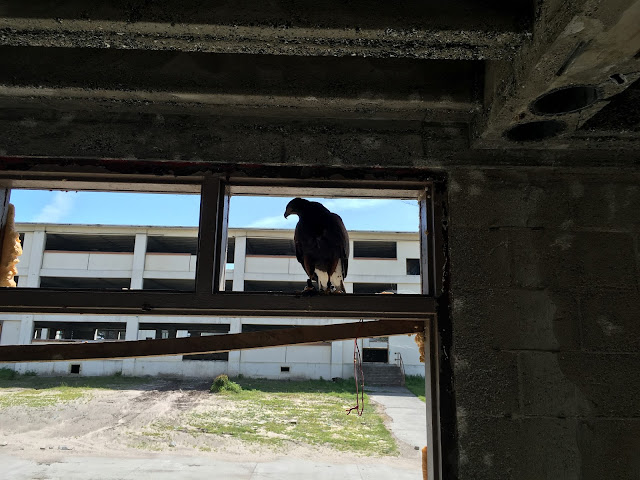 Mora comes back to the man's arm -  day after day, month after month, asserting her food chain presence/ prominence: 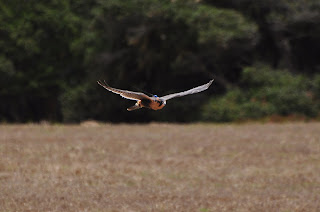 Amazing!  (while Art Ranger can barely find her vehicle in the parking lot).

In Spanish, Aplomado means having aplomb, being poised, confident, sure-footed (or winged?).  May we all achieve the right amount of "aplomado" now as we celebrate the holidaze and transition into a new year full of being present, even in the tiniest moments (despite current events).   Please continue to send your art incidents to FAF@homelandinspiration.org where the Art Ranger plans to take up a seventh year of this blog, this invented "place" we seek to share with you.
Posted by Artist At Large at 6:48 PM 1 comment:

Email ThisBlogThis!Share to TwitterShare to FacebookShare to Pinterest
Labels: birds that come back

Dear ones,
As we close our seventh year in the saddle here at The Department of Homeland Inspiration, we welcome your contributions of visual wonderment or inexplicable passing moments, such as this one from Diane Gage:
Thank goodness WE LOVE.  While we were out looking for something to be glad about, we settled on the variety of carrots available today:
On its way to becoming a component of the "mire poix" for the bean dish, soon to be absorbed dutifully into flavor (along with celery, onion, garlic).  Mire poix translation could be see the weight, therefore the ballast of your soup.

Another thing to be visually glad about this week was our special conversation with Arte Mendoza about his vehicle.  From the Phillipines, Mr. Mendoza explained pridefully all the customization and special mounts, as well as the green-edged hole for "air condition" so "no wind no come BAM you to street". 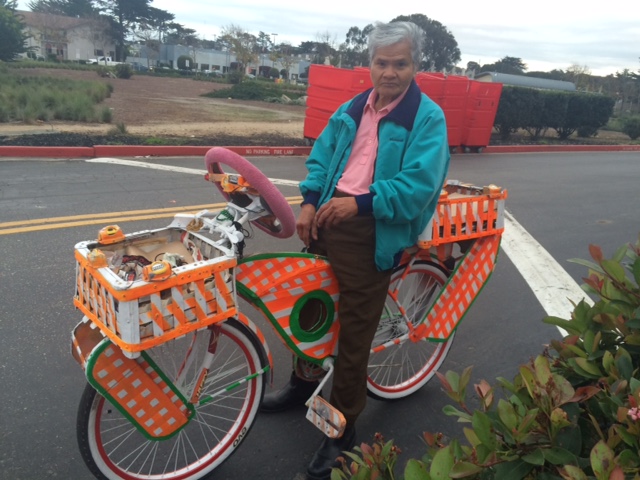 Especially fond of the pink steering wheel cover in these not soft or fuzzy times. 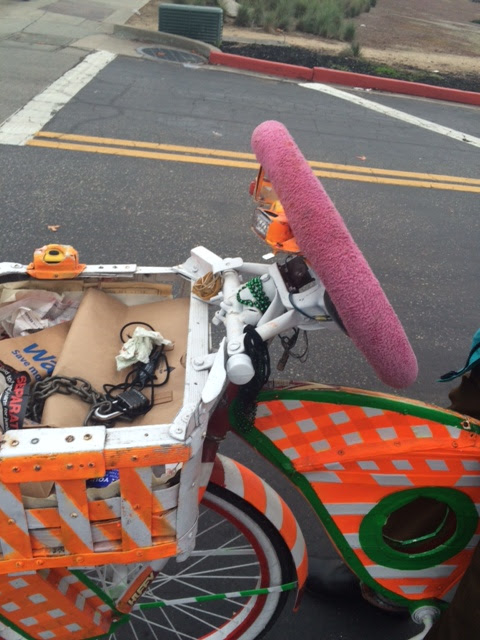 Go Arte!  We would also like to buy a popsicle now, but that is not his gig.

Back to our discussion of vegetables and visuals:
Sculpture is about Proportion.

Has anything of note reached out to you lately from the universe of surprises?  If so, please let the Art Ranger know: FAF@homelandinspiration.org, and she will try to weave it in to her macrame.
Posted by Artist At Large at 7:33 AM No comments:

Dear ones,
Our hearts go out to the array of pain around the Ghost Ship tragedy in Oakland.  The creatives are talking about this.  And so should the regulars.  The fact that we see these as two different camps is part of the problem. Artists are on the front lines, transforming and revitalizing our spaces and places, holding the mirror up to our faces, vigorously digesting our turbulent reality.  We the People need to invest in the well being of artists, celebrate and nurture our contributions, otherwise what a vapid and sterile existence.

Here at the Department of Homeland Inspiration, we are nearing the end of our seventh year of service.  We try to nourish with images:
Let's just develop this color scheme:
These are moments we have collected over the past week, while simultaneously being interested in the moments you may hve gathered, and why.  Making this blog is not a substitution for making art, but a way of sharpening our knife, being attentive, inventive? and not interested in fitting in a box.
Wow! 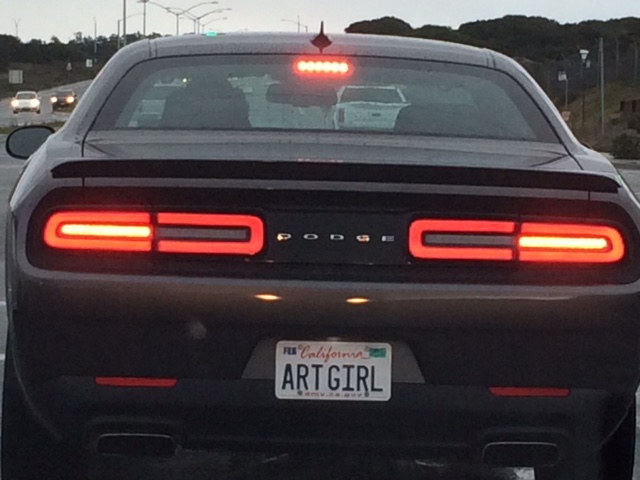 Speaking of which, The Art Ranger had some cause for pause, some nearly tailgating over the DODGE.  We wanted to know more about this person, this personae, this ART GIRL swagger.  As on the surface this vehicle doesn't say (to us) ART GIRL, but maybe says - retired detective, or guy who sold something.  We want to think - she's got a gig ......

Please send us something that you do not understand at all to: FAF@homelandspiration.org.
FAF stands for Found Art Friday, which is a breath of visual freshness that can, of course, can happen at any time on any day.
Posted by Artist At Large at 8:27 PM No comments:

Email ThisBlogThis!Share to TwitterShare to FacebookShare to Pinterest
Labels: 5 in a row

Dear ones,
The Art Ranger wants to know - why does the dental hygenist always try to talk to you?
This week, while dealing with the "storage full" error message, we fixated on this shot from a visit to Crystal Bridges museum in Arkansas (where our dearest 102! year old aunt lives). The painting by William H. Beard (1824-1900) is called "School Rules":

Which goes quite nicely with our latest book search:

"Well Glory bee!" as our grandmother used to say, and "Life is the most interesting thing on earth":

During this time of national reckoning (wreck)oning) we thank our lucky stars to know some literature and art, full of ripe, healthy parody and satire that lays bare the truths in a creative and timeless way. One that comes to mind (again) is the farcical play, Ubu Roi by Alfred Jarry, produced in 1886. First written to make his school mates laugh,  a few years later performed with marionettes, then as a short play (pre-Dada, Surrealism or Absurd Theatre), Ubu Roi points out the buffoonery of self-inflated power in a very direct and bawdy way.  And the first word of the play is "Merdre" loosely translated as shit! but with an extra r added to make it extra coated with it and ever more full of poop and pomp.
And you can see now how seductive the offer was for some, what the making it "great again" pretend nostalgia was grasping for.  A big blond man on a horse with an expensive coat directing his own TV show.  A show of farce of epic proportions.
Our art can not help but take action, as we must live life intensely like a raw sponge.  Perhaps the absurd theater of our country rolling itself in "merdre" in front of our weary eyes can have an unforseen salve.  That is, really noticing what matters to you.
What is on your mind? or what intersected with your visual-temporal panorama of existence?  Please send some to:  FAF@homelandinspiration.org. 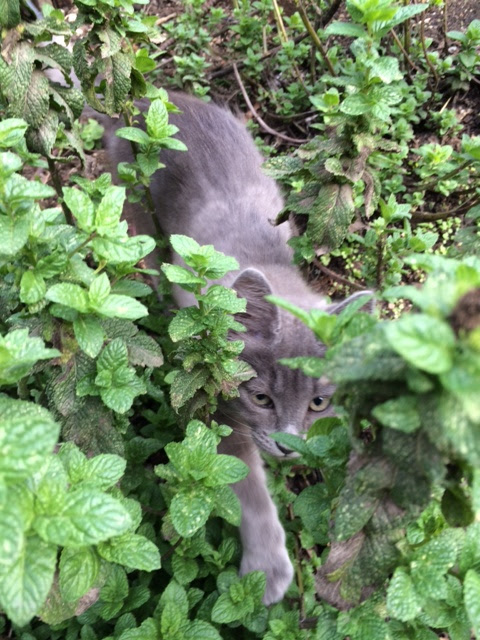 When in doubt, we look at the adoptee baby streaking through the mint or playing paw hockey with a pistachio shell, a coffee bean, a slice of celery.

Posted by Artist At Large at 4:29 PM No comments:

Dear Ones,
How are you? The Art Ranger realizes now how much she actually values the concept of nationhood and still has ideals and high expectations for how it should be. Our community feels strengthened in some ways, clarified as we see what threads to pick up.  A poet friend and Found Art Friday appreciator Diane Gage, called herself "highly discombobulated" this week.  Those words stick on fork so accurately. Yes -  poetess touched the nerve with her Gage gauge.
We didn't believe that it meant the same thing to everyone, but we did believe and we do believe in most of our constitution, if we could just do it with empathy and love.  OM om om om om ommmmmm...... insert Bone Breathing........ ....... .......

Wise sentiments heard in auditory form from writer Isabel Wilkerson, How our country is now like an old house.  And we are going to have to look at what is in the basement that needs attending to.  The stuff in there is not going away (paraphrasing). Dang - the old house needs a lot of work!
Artist At Large who Teaches, despite being "highly discombobulated", can report that the students still make the endeavor worthwhile.

East coast (local) correspondent, Julie Regan, observes a patch of sky revealing the
True Color of leaves
At rest, when they are no longer hungry to produce chlorophyll       -     phew
Maybe it is hormonal, our world.

Please send evidence of your uprisings and musings to FAF@homelandinspriation.org
Posted by Artist At Large at 7:19 PM No comments:

Dear Ones,
As you might imagine, we have been severely highjacked again by an irrepressible urge to rant
while searching between the ears for remnants of the Homeland Inspiration Espiritu.