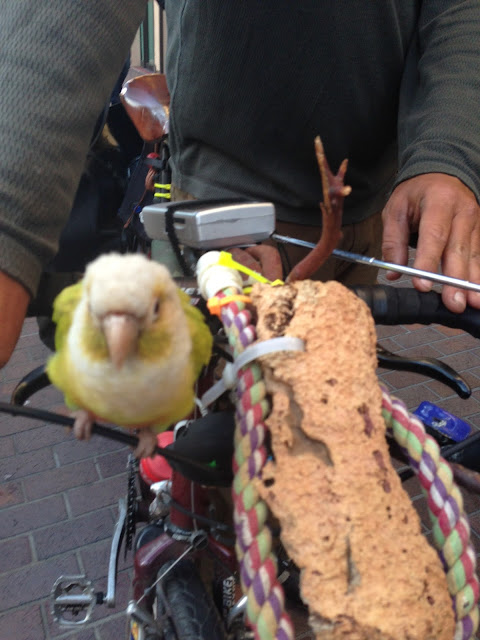 Today we start our sharing with this image of "Tweety" who was recently mentioned in our Big Sur post, then was sited a week later by Gentleman Jeff in Monterey.  Here she offers a closer view of her cycling lifestyle and rig.

Here are two offerings from Bonnie Hotz in Salinas simply being present about her yard and surroundings: 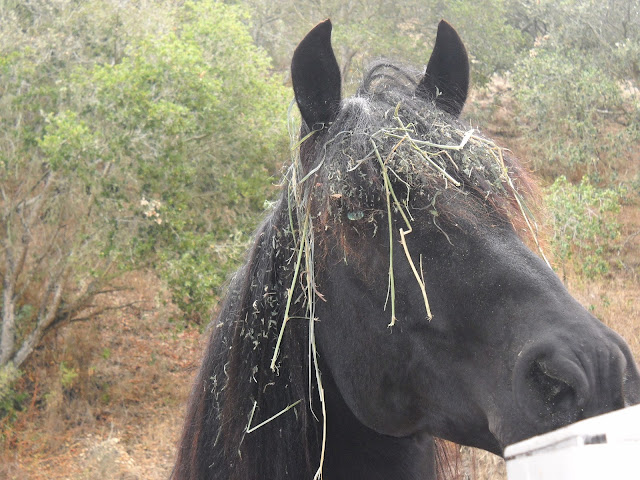 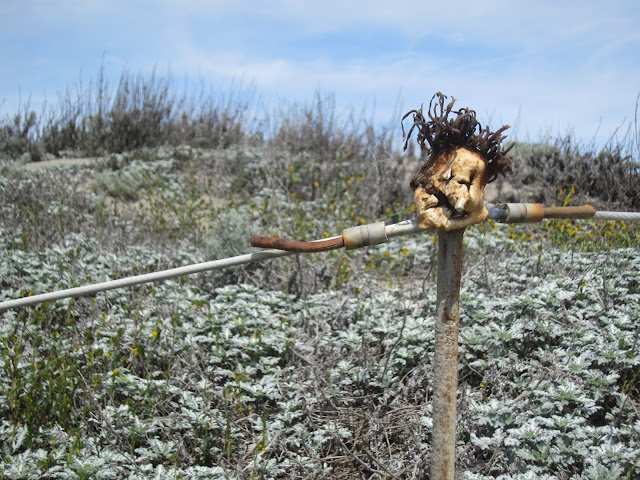 And Moss Landing along the dunes ...

Bye Bye now - keep your eyes peeled, as opposed to veiled, and have a earthful week...
FAF@homelandinspiration.org.
Posted by Artist At Large at 10:22 PM No comments:

Well friends, since we have had some awful sickening surprises in our country this week, our wish is to take minds off of tragedy and speak of some plain simple sweet surprises instead. Image presents.
Today's found art launches with this one: It is very satisfying for the Art Ranger/ Artist At Large to have enough people following the blog so as to enter the dialog, furthering the subjects at hand.  Apparitions linking to the recent post featuring "the little lady" who founded the healing grotto at Lourdes and instructed St Bernadette to eat grass at the sacred location where the water begins.
Also this week arrives this:
It gets easy,  as one adds up the decades, to put childhood in the distance; but it will always be our foreground background.

Now we are going to switch gears and attempt to tell you about our evening in Big Sur: 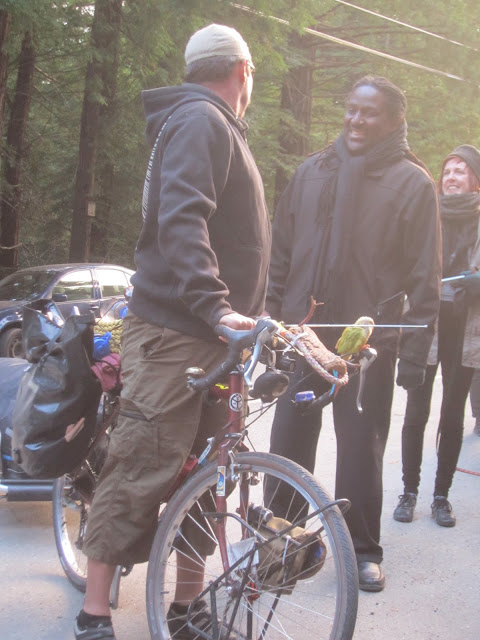 Man cycling by the concert Will Call line along HW 1 with his companion, "Tweety". Note Tweety's perching options mounted on handlebars. Note venue security not exactly but almost harassing this friendly character who said, no, you are not searching through my bags.
Once upon the Henry Miller Library grounds, we were swept up by the moment as well as the history, as well as the freezing damp ocean air.

Jack Keroac may have been floating around somewhere.
It was unforgettable, yet she doesn't really remember the music of Grizzly Bear.  Would a soft thing speak louder?

In case you are a wood worker, amazingly amazing: http://bigsurredwood.wordpress.com
And finally, we listened to a radio program about Space Weather and became enamored with the thought of it. Wishing to start life over and be in a band named Space Weather. We also discovered that there is a community of space weather enthusiasts who post in real time from all over the world.

Peaces of love.
See found any art lately?  FAF@homelandinspiration.org
Posted by Artist At Large at 4:47 PM No comments:

Dear Ones,
What anyway is the purpose of counting? Being "interiorly compelled" by the service of finding art in unexpected ways and places. Counting has the veneer of cohesion.  Pretty soon though you are owned by Google. You've blogged for this long, and have woven a technological patchwork quilt and would like the accumulated effort heaped all in one place.  We see how voracious "the cloud" is now.  Normally you put eggs in more baskets.  Now, with the prevalence and distraction of the mobile device and its magnetic suction, diffusion and dilution of concentration, what is place, what is person? 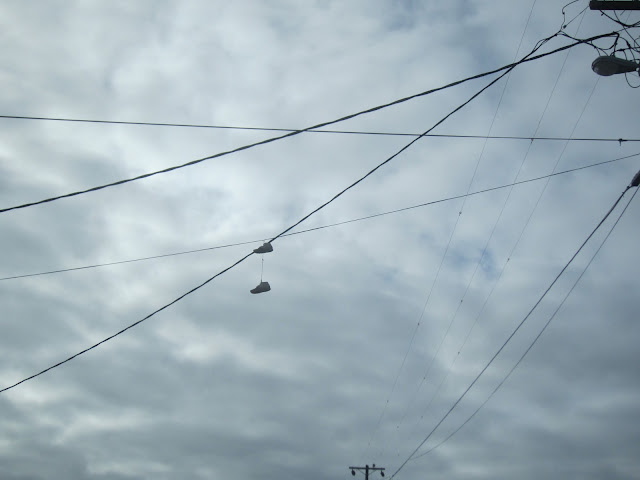 Today's found lings (due to community mail box being rather sparse) are made up of eye toward our iphone offerings of late. Because it can just sneakily be present when your camera is not. 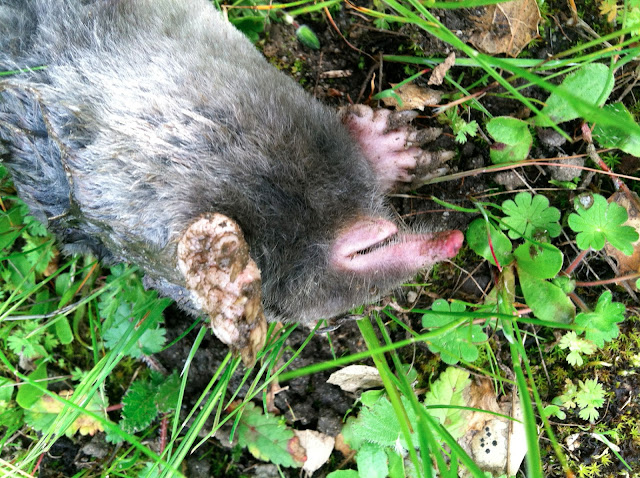 Vole death proudly accomplished by dog, Bailey
(Circus clowns, please take nose notes)
Send observations to FAF@homeland inspiration.org.  We are looking for flocks of birds.  How do they stick together while flying about, flexing those shapes in the air?
Posted by Artist At Large at 5:00 PM No comments:

Dear Folk,
Thank you for noticing that we missed a week.  The artist was not at large, but stuck to a chair.  There was no time to look around at the fabulous elsewhere.  She was screened-in and it wasn't a porch.

For some, last week was Holy.  It made our news-story-approval-delight to see the new Pope man washing and blessing the feet of juvenile delinquents of various colors, genders and faiths, while wearing old sandals.  The bowl of Holy Water very plain, much resembling our dog's water bowl. (And we find the spirituality of dog comparable to sainthood.) Though we are not Catholic, we have always enjoyed the pictures and stories. 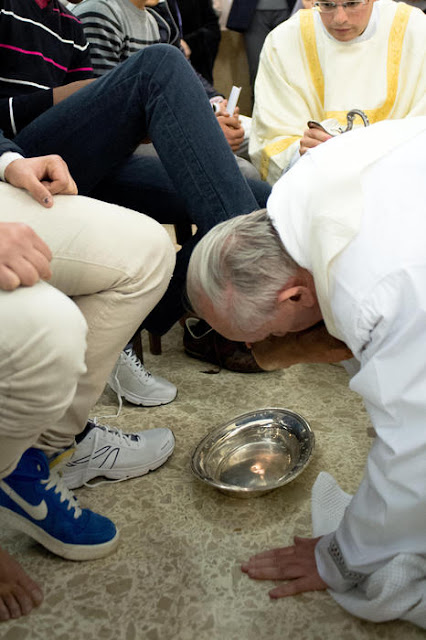 Here are highlights of Hagiography as gathered and digested by the Art Ranger:
One of our faves is Saint Bernadette, origin of the healing grotto at Lourdes in France. She saw an apparition 18 times at a particular place of a little lady who had roses about her feet. Nobody believed the girl at first, especially not her mother. 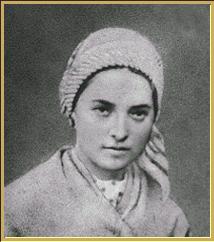 "I went back because I felt myself interiorly impelled. My mother had forbidden me to go." The girl checked to make sure that the little lady did not have cloven hooves for feet. Gradually apparition lady began giving Bernadette some instructions for her new job "(The Lady) told me that I should go and drink at the fountain and wash myself. Seeing no fountain I went to drink at the Gave. She said it was not there; she pointed with her finger that I was to go in under the rock. I went, and I found a puddle of water which was more like mud, and the quantity was so small that I could hardly gather a little in the hollow of my hand. Nevertheless I obeyed, and started scratching the ground; after doing that I was able to take some. The water was so dirty that three times I threw it away. The fourth time I was able to drink it. She made me eat grass growing in the same place where I had drunk; once only; I do not know why. Then the Vision disappeared and I went home." The next day, the spring began to flow.  The Holy Water of Lourdes evidently heals people of many things. They sell jars of it in the gift shop.  For us, Lourdes meaning heaviness in French really adds to the healing prowess.

Another preferred gem of sainthood narrative is of course, Virgen de Guadalupe.  She looks great on anything.

This time it was peasant, Juan Diego, who saw the apparition, a girl of 16 surrounded in light and speaking to him in Nahuatl (thereby nicely giving voice to the indigenous mesoamerican peoples). She left roses and her image miraculously imprinted upon some cloth. And according to Octavio Paz, "The Mexican people, after more than two centuries of experiments, have faith only in the Virgin of Guadalupe and the National Lottery".[49]

Here was a fairly recent iteration of Guadalupe in Encinitas, California.  And that was the saga of The Surfing Madonna: a perfect clash of public versus private art.  This blogger well tells the tale:  http://artistsandthieves.com 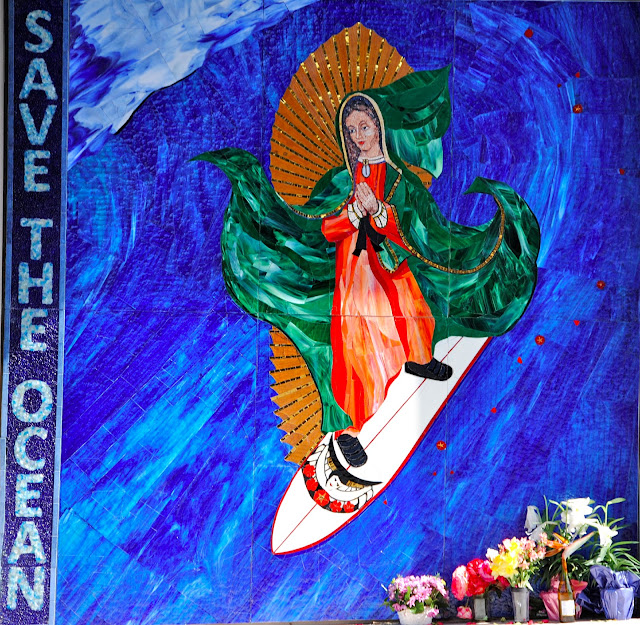 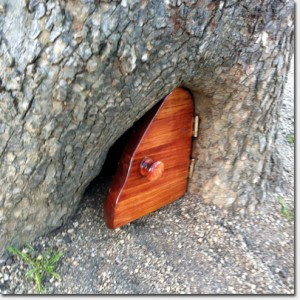 Thank you to Paul Murphy and his neighbors in San Jose's Naglee Park for sharing those.
May you have a chance to enjoy each onset of blossoms and their shedding.  Send images to:
FAF@homelandinspiration.org
Posted by Artist At Large at 8:37 AM No comments: